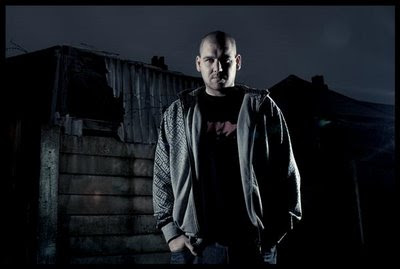 WHAT HAVE YOU BEEN UP TO LATELY?

I've just finished my first album, which has been taking up most of my time for about a year now. Really really happy with it, and i'm off to get it mastered next week along with the next 12". I was pretty naive in terms of how much time not only an album takes, but everything else around it, artwork, mixes, shows, then promoting the shows, interviews and still trying to keep on top of online network sites & my http://godsofwar.wordpress.com blog. As a result i've been trying to keep gigs to a minimum, the last show i did was a couple of weeks ago - Kievbass in the Ukraine. A brilliant night run by some really enthusiastic people. Its funny how i still find time to watch back to back episodes of The Wire though.

WHAT DO YOU HAVE COMING UP?

In a few days from the moment of writing i'm over in Bristol for [Dissident] a night which i played late last year, in fact one of my favourite events. Always a brilliant line up with a huge drum & bass acts in the main room - Dom & Roland is playing, (one of my heroes) along with Teebee, Bailey, D Bridge, Ebola, Warlock and more - a huge line up .That'll no doubt be an insane night. From there i'm going to spend a few days with Ebola and will be in studio for his Wrong Music Radio Show on Monday the 4th of May 10pm - 12am. Soo many events coming up. The Remix Allnighter at Matter in the O2 will be massive too, Joker, N Type, Freeland, Herve thats on the 15th of May and later that week i'm in Rotterdam for PRSPCT XL 9 in association with Subway. That is another dream line up for me, soo many gods playing that night, Current Value, Limewax, Radien , Donny, Hellfish..... :)

I have my Virgo / Murder Us 12" out on Ninja in a few days on the 4th of May and another 12" (which is in fact more of an EP) to follow around July / August and finally the album August / September on Ninja Tune.

I've also a remix of Sarantis featuring Warrior Queen - Retaliate on the Senseless' compilation 'Vocals & Version 2' compilation June, a month after 'Vocals & Versions 1'. Other remixes completed are 'Come Out To Play' for Bong-Ra - something i initially didn't play out much but its really slaying the dancefloor i'm proud to say, and also 'Super Mantis' by Scorn for Combat Recordings.

I'm always keen to remix people and have plans but nothing confirmed yet, unfortunately my album deadline forced me to pass up remixes for Dj Food, Juice Aleem & Yppah - and that is stuff from Ninja alone. I'm about to start work on something ball-bustingly huge but i don't want to say too much about that in case it doesn't come off.

In the same way that i'm always up for doing remixes i'm forever promising to collaborate with other acts i think on my list of people to work with now is Ebola, Emika (a new signing to Ninja Tune) Broken Note, Bong-Ra, Mount Kimble, and i'm sure i've missed a couple of the list.

I'm about to start work on a number of sessions for Eddy Temple Morris (who has been a big big supporter of my stuff) and Jon Kenndy on XFM and Jay Cunningon KISS FM.

WHAT MUSIC ARE YOU INTO RIGHT NOW?

Untold - Sweat on Hotflush. Its the classic problem for me, i'd really struggle to pull of playing this out unless it was in a marathon set but it's a beautifully made forever rolling piece of sound.

Two Fingers - Two Fingers on Big Dada. A inspiring cross pollination of hiphop & dance hall taking in drum & bass sounds and techy moods. In particular the two tracks with Ms Jade - 'Better Get That' and 'Doing My Job' two track i'd wish i'd could have written.

I'm actually really enjoying the re-release of Miss Kitten & The Hacker's 'First Album' i guess i missed it the first time round.

Instra:mental's output is really amazing right now too as is Andy Stott's and anything Current Value touches.

WHAT ARE YOU FEELING RIGHT NOW?

The Sonic Router , http://sonicrouter.blogspot.com/ is my favourite music blog right now. It avoids the 'i'm cool and you can't be in my cool gang' vibe that a lot of new music blogs seem to have going on. Knowledgeable reviews by knowledgeable people.

DVD Delirium Volumes 1-3. An essential guide to obscure cinema. Its ultimately a reference book, but a very informative well written one that i've read through cover to cover on many occasions. Good source of film titles to draw inspiration for song titles too.

The Office (U.S). Next to Seinfeld my favourite comedy series of all time. A different show to the original UK version that actually beats it for me. It got largely dis-regarded over here and buried on the TV schedules, but its a total gem.

WHO SHOULD WE WATCH OUT FOR?

Regolith - its hard to sum up what these do exactly as any discription of them i think would be instantly giving a limited view. A two man partnership using heavily treated music and really dark drone instrumentation. All most classical at times.