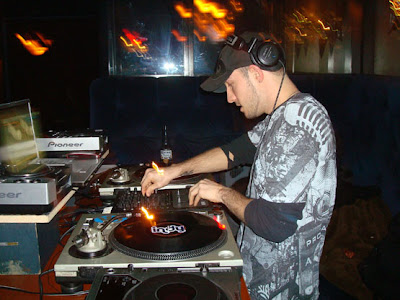 Based out of Indianapolis, I'm a dude that makes and plays music. Behind the boards I produce under a gang of aliases, under a gang of genres. Behind the decks I'm Cool Hand Lex, playing pretty well whatever shakes rumps and isn't a club line dance. I also run the Circle City Mixshow (http://www.circlecitymixshow.com), a website dedicated to featuring Indiana's incredible DJ's and their music. I'm a Nappy City representer!!

WHAT HAVE YOU BEEN UP TO LATELY?

I'm steady on two turntables, man. I have 4-6 weekly shows including a House music night, a couple Top 40/ crossover nights, a new dance/remix oriented night, and some live radio mixes in there as well. I need to spend more time producing... I always feel so guilty about that!

WHAT DO YOU HAVE COMING UP?

Biggest thing coming up is the release of the homie Grey Granite's single, "Lay U Down" on HeavyGun (available on iTunes, Amazon, etc...). I just finished work on some Baltimore Club tracks, some House tracks, and a couple R&B remixes and bootlegs that I'll be making available shortly as well. In November I'm playing at Zanzabar in Louisville with the dudes DJ Sleepy T (http://www.myspace.com/djsleepyt) and Figure (http://www.myspace.com/figurefigure
). Pretty stoked about that. I'm also trying to work out a brief trip out west to rock with the homies DJ Dangerous Dan in Denver (http://www.dangerousdan.net), DJ 812 in Arizona (http://www.myspace.com/dj812original), and some more cats around the way.

WHAT MUSIC ARE YOU INTO RIGHT NOW?

So much good stuff out right now... Of course, Grey Granite (http://www.myspace.com/greygranite) is cued up, backed up by the super production of J. Brookinz (http://www.myspace.com/jbrookinz). Nu Disco is the next wave in electronic music "fads" (I say fad only because its popular, not because its dispensable) and my guys Sleepy T and Figure just released a track called "It's Only Love" thats a banger. The Mudkids just recently dropped an EP as well, "MKEP," and that's been in rotation. Everything Continues (http://www.myspace.com/everythingcontinues) latest mix is super dope and has been catching a lot of action in my car. I've really been feeling all the house records Afrojack, Spencer & Hill, and Alvaro have been putting out. Lots of stuff by Doorly and HavocNdeed have been hitting my sets too. Again, lots of good music all across the board.

WHAT ARE YOU FEELING RIGHT NOW?

I'm really feeling Ableton Live right now. The more I use it, the more I enjoy using it! I'll back that with my Novation ReMote 37SL which is a dandy piece of gear. Its got Novation's Automap built in, allowing you to control all your plug ins on board without having to set each up individually! REAL time saver. I'm also gonna ride for Yats, a local cajun restaurant. Their Maux Chox is killer and only trumped by their classic Crawfish etouffe. Definitely a good look now that its getting colder. Also, I'm really feeling everyone in the city that's fighting to keep electronic music alive and growing. After Indy got hit with the anti-rave laws around 2001, its been a solid uphill battle trying to get people to support and out to events. There are a few people really working to keep it alive here, so thank you.

WHO SHOULD WE WATCH OUT FOR?

Anybody that I've already mentioned, check 'em out. Surely there's something in there that will catch your ear. Peep the Circle City Mixshow for some new music from local DJs, check out the Heavy Gun blog (http://www.heavygunblog.com) for all sorts of badassery, as well as Bring the Fiyah, a spot on the web that legitimately lives up to its name!

Posted by Bring The Fiyah Crew at 3:10 PM